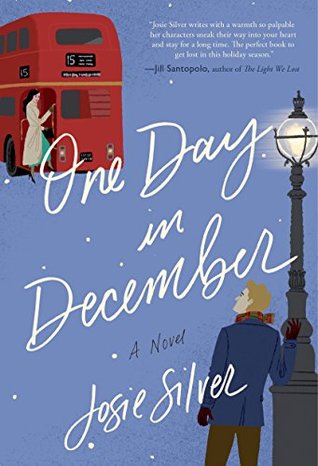 Laurie is pretty sure love at first sight doesn’t exist anywhere but the movies. But then, through a misted-up bus window one snowy December day, she sees a man who she knows instantly is the one. Their eyes meet, there’s a moment of pure magic… and then her bus drives away.

Certain they’re fated to find each other again, Laurie spends a year scanning every bus stop and cafe in London for him. But she doesn’t find him, not when it matters anyway. Instead they “reunite” at a Christmas party, when her best friend Sarah giddily introduces her new boyfriend to Laurie. It’s Jack, the man from the bus. It would be.

What follows for Laurie, Sarah and Jack is ten years of friendship, heartbreak, missed opportunities, roads not taken, and destinies reconsidered. One Day in December is a joyous, heartwarming and immensely moving love story to escape into and a reminder that fate takes inexplicable turns along the route to happiness.

“Boy sees girl. Girl sees boy. Boy gets on the bus, kisses girl’s face off, and they live happily ever after.”

“It’s a pretty dull story when you put it like that.”

I really enjoyed the book, finished it quickly especially since I was doing a buddy read. Yade was so patient, she was so cool to buddy read with, I can’t wait to buddy read another book together. I decided to rate the book 3/5 stars mostly due to the way Jack was portrayed for the majority of the book. However, I wanted to keep reading as I wanted to read how Laurie would reveal to Sarah that she loved Jack and he had been the man she was searching for over a year. I was heartbroken by what Laurie experiences while seeing Jack and Sarah date and have a happy relationship while also balancing out her personal life.

I did not like how Jack and Laurie decided to keep certain secrets from Sarah for a while. It was also heartbreaking when Laurie confesses it all to Sarah resulting in her missing a few of Laurie’s life events. I loved the ending the though, it was pretty romantic, it seemed like the ending of a romance film. I listened to the audiobook, I actually loved the narrators they used, I felt like I was watching a film as I went through it.

One Day In December

3 thoughts on “One Day in December Review”